A Father Copes With Childhood Cancer

A dad shares about finding the greatest hope amidst his son’s cancer journey.

As parents, we are not supposed to bury our kids. And that was so gut-wrenching for my wife and I—that we even had to consider this could be a possibility for our son.

Here’s how we came to that place.

In the beginning it didn’t seem like a very big deal.

My 10-year-old son Jack discovered a bump on his arm, about the size of a grape. He is an active kid who plays hard with his brothers and gets banged up all the time, so we didn’t think much of it.

But then when the bump didn’t go away after a few weeks, we decided to take him to the doctor.

The doctor ordered an MRI, which showed that fluid had formed around the second tendon in his right hand.

He went through a list of possible explanations, including childhood cancer, and then recommended we see a specialist. He basically punted, which was difficult because it meant waiting to find out what was wrong.

My wife is a researcher and so she went to town on Dr. Google, which only increased our fear and eroded our hope. And as we waited, our minds started going to bad places.

We later met with a specialist in Portland, who thought the tumor was most likely non-cancerous but still recommended surgery.

We felt good after the conversation but then few weeks later I got a call from him.

“Not good,” he said. He had received the results of the biopsy and the tumor was cancer.

My heart sank into my gut.

It turned out that Jack had a rare form of myofibroblastic sarcoma that affects less than five people in the U.S. every year.

The doctor spoke urgently and wanted to schedule Jack for surgery as soon as possible. The situation quickly felt weighty and heavy.

The day of surgery

I will never forget when they wheeled Jack off for surgery. As he was going through the doors, away from my wife, Alicia, and I, he waved at us with uncertainty on his face. I could tell he was scared, but he was also being so brave in the midst of it.

All we could do as parents was to sit and wait. I think the waiting was the hardest part for us—the waiting and wondering.

Finally the doctor came out and told us the surgery went well. They removed the cancer.

When we saw Jack, he was all smiles. He had a popsicle and was being doted on by all of the nurses and soaking up all the attention. Ignorance is bliss as he probably didn’t realize the gravity of the situation. 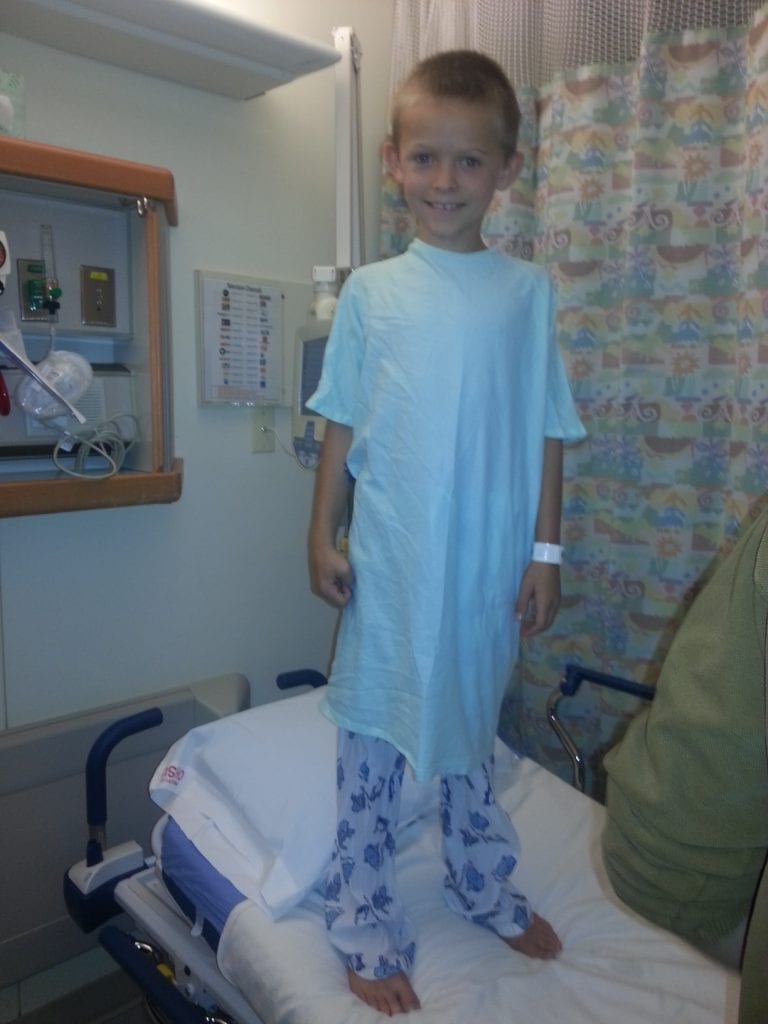 I thought, great this is all good news. Now we can take him home and resume normal life, right?

The doctor told us there was still a concern of what this particular tumor could do if they hadn’t gotten it all out. There was a small chance it could come back and metastasize in his lungs.

Those words caused my wife and I to envision the worst case scenario: the cancer returning and spreading, no longer just a bump but a threat to our son’s life.

That was a nerve-wracking season, as we had to get CT scans and MRIs every few months and the waiting continued to see if this form of childhood cancer would return. Or not.

As parents, we are were on edge for our child’s health—maybe even more than we would be for our own.

During the thick of this journey, I had some good friends that walked with me and didn’t give me crappy advice or silly platitudes. One of the best things a friend said was, “I can only imagine what you’re going through, but we’ll crawl under the rock with you and we’re with you in it.”

Those relationships were huge for us.

Yet the most important way I found hope was through my relationship with God.

The Bible says that God holds every atom and cell in our body together. He knows everything that is happening, and he knows every hair on our heads, and he holds it all together.

In Western culture, we often place our confidence in what we can do and accomplish. But this is was one of the first big events where we were helpless.

We did all we could to provide the best medical care and support for Jack. But at the end of the day, there was nothing we could do to remove the uncertainty.

I found great comfort in hearing low percentages of cancer spreading or returning. I also could have put my hope in myself and in what I can provide financially. But at the end of the day, those were all false hopes because they still couldn’t fully control the outcome.

They can be comforting and good, but at the end of the day the most reliable hope is in God. If we don’t have that hope, then all we have is those small hopes that will ultimately fail us.

God is a greater hope that doesn’t fail us no matter what the circumstance is. We knew that he loved our son and that he had a good plan for him, even if we didn’t know what it would be.

Cancer provides the opportunity to consider what you are really building your life on. You have a chance to discover God as your greatest hope. In fact the Bible calls Jesus the Living Hope (1 Peter 1:3).

Besides hope, it’s also an opportunity for couples to deal with the crisis together, not individually.

I don’t think I did that very well at first. Dealing with my own pain, I missed my wife and didn’t enter into to the pain when we were in the midst of it—I failed to cross that bridge.

Childhood cancer puts a lot of stress on a marriage and men have an opportunity to help connect with their wives through the challenges. For more on this, read Cancer and Marriage Stress (coming soon).

As for Jack, over time his scans continued to show clear.

It remains to be seen how this will affect Jack’s story in the long run, but there have been some positive outcomes so far. We have seen him grow in his capacity to handle life’s challenges and also show more compassion for others who are suffering.

Recently we passed the five-year mark for Jack’s childhood cancer scare which was a significant milestone.

It turns out this bump may have just been a bump in a road for Jack and for our family, but we are thankful for the reminder of the trustworthiness of our greatest hope.

If you would like to discover hope through a relationship with God, read Knowing God Personally.