At the End of My Rope
How a young woman overcame stage IV melanoma through unexpected sources.

Until I reached the end of my rope, I never considered the alternatives.

As a freshman at Boston University, I faced challenges socially, athletically and academically. At just 17 years old, I feared being away from home and was younger than most other freshman.

In high school, I was a good student, but in college I struggled to balance my studies with being an athlete on the diving team. We practiced every day and had competitions every week.

Stress weighed heavily on me.

After Thanksgiving break, I noticed a strange spot on my right temple. I’m fair skinned and I burn pretty easily, but I certainly didn’t expect what happened next.

I travelled home to New York and saw a dermatologist, who removed the spots. About three weeks later, after finishing my finals, my dad told me the test had come back positive for cancer.

My doctor diagnosed me with stage three melanoma. I was scared, but at the same time I didn’t realize the seriousness of it.

The doctors removed some lymph nodes, part of my salivary glands, and some skin near my temple. They also gave me immunotherapy called Interferon.

I recovered and returned to college life, including competing in diving. My junior year, I had my best season, making the podium at the America East Championship. 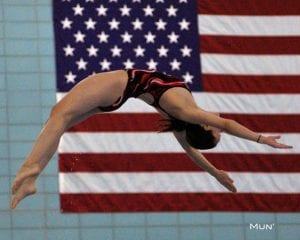 My social and academic life had also improved, but then a scan revealed my cancer had returned and spread, now making it stage IV melanoma.

I was devastated and decided to postpone my senior year.

Doctors performed surgery twice on my neck and also removed part of my ear. My oncologist believed that the melanoma would likely return in about three to five years, which terrified me.

I wasn’t thinking about death, but was more scared about my future, including how this might affect getting married and starting a family. What am I going to do with my life now? I asked myself.

I tried to escape through partying, but there was no fixing my reality.

From bad to worse

A few weeks later, after finishing radiation, I noticed a little lump under my chin. A biopsy confirmed melanoma for the third time.

I couldn’t believe it. I thought I had at least three years before a possible recurrence, but this was only two weeks later!

I lost all hope in my medical treatment, to say the least. I was clearly at the end of my rope; I felt like I didn’t have the capacity to cope anymore.

I now had six or seven tumors, including on my neck, lung and spine. My doctor said she didn’t have any treatment that could help me. Even worse, she said I might only have seven months to live.

Gripped with fear, I thought I might die from melanoma.

A few people encouraged me to not give up, including my family. My mom and I started desperately looking for other treatment options—something that could give me hope.

I started on a chemo drug called Temodar, but then my mom also researched alternative treatment, with the help of a friend well-versed in holistic medicine. One approach was the Coley Vaccine, which used to be available in the U.S., but is now only available in Mexico.

We also considered the role of nutrition. I had been studying this subject in college and believed it could help a person heal, and so I was open to that.

I ended up going to CHIPSA, an alternative cancer treatment center in Tijuana, Mexico, where I got the Coley Vaccine. I also began a strict diet of only organic food, no added refined sugar or salt, unprocessed, low-grains, low-animal proteins, and no caffeine—considered a modified Gerson Diet. I also did a variety of other alternative methods. You can read about the details on my website.

With my future uncertain, my mom and I stayed in Mexico for three weeks. I noticed that the tumor on my chin started to disappear.

Getting my next scan

After returning to the U.S., I had a pet scan and met with my oncologist for the results in March of 2011. He stood there stunned and silent.

“So are you going to tell me what the results are?” I asked.

He said, “There is no evidence of cancer in your scan. Keep doing what you are doing because it seems to be working.”

I was ecstatic. For a short time, I was just super grateful just to be free from cancer.

Yet quickly I grew just as unhappy as I was before.

I tried being grateful and more positive and appreciating the relationships in my life more. These were good pursuits, but I was searching for a purpose beyond just doing life better. I wanted to know more about why I survived and what to do with my life.

During that time, I started going back to church.

I grew up Catholic, but I didn’t feel much of a connection with God at that point in my life. For years, I felt like he was looking down on me and judging me for all my mistakes and sins.

Yet I decided to give God a chance for the first time in my life.

During my time of seeking alternative treatments, I had prayed every day that God would heal me, though I did not have strong confidence God would do it.

After my treatment, I started attending a Bible study for college athletes, learning more about Jesus, that he loves me and died for my sins and mistakes—past, present and future. There is nothing that I could ever do to make him love me less, nor could I earn his hope and healing.

For me, Jesus became like alternative cancer treatments: I never considered God as a real and valid option to find hope until I came to the end of my rope. And when I reached the end of myself, I began to see his love was real.

I surrendered my life to him. I experienced such a comfort, trusting that he was with me and that he loved me and would take care of me and it didn’t matter what other people thought.

That was the beginning of my new life. It wasn’t just cancer that changed my life, it was finding God after cancer.

Where I’m at now

I continue to be healthy today, and recently celebrated my 10th cancerversary, or the anniversary of being in remission.

I still eat healthy and practice holistic medicine. And besides taking care of myself I serve as a cancer coach, talking with others about their journey and helping them think through their healing process. I share my story and give tips and resources about nutrition and living the anti-cancer lifestyle.

I couldn’t say that nutrition and lifestyle can heal everyone from cancer, but there is compelling evidence that it can help.

It’s really hard when you hear a stage IV cancer diagnosis, let alone any cancer diagnosis. Your mind goes usually goes straight to death. But sometimes it is possible to heal. Sickness was not God’s intent. It is the result of the brokenness in this world.

Regardless of what you face, there is a purpose for your life. One verse I like is Jeremiah 29:11: “‘For I know the plans I have for you,’” declares the Lord, “‘plans to prosper you and not to harm you, plans to give you hope and a future.’”

God loves you and you’re not alone. Though you might be at the end of your rope, there is no reason to feel hopeless—like my story shows, hope waits to be found.

It may mean you consider new alternatives, like having a relationship with God.

It may prove exactly where you discover the greatest hope.

If you would like to learn more about how to begin a relationship with God, read Knowing God Personally.

For more help with finding strength on your journey, read Asking God for Help or Fighting the Fear of Cancer.