I Lived to Tell the Story

There were points in my cancer journey, with all the crazy twists and turns, where I wondered if I would even live to tell the story.

I was 24 years old, in phenomenal shape and dedicating my entire life to health. Working as a personal trainer, I exercised regularly, and ate well.

I took care of my body, but it didn’t prevent what happened next.

During the summer of 2016, I started experiencing lower back pain, which I thought I strained lifting weights. As the weeks passed by, however, I reached the point where I could hardly take five steps without excruciating pain.

The breaking point came while I was with my girlfriend, Lauren, now my fiancé. One night at her apartment, I started vomiting blood.

As my symptoms continued, I checked myself into the emergency room.

At the hospital, they discovered I had lost two thirds of my blood. They rushed me into emergency surgery, and when I woke up, I thought they were going to tell me I had an ulcer.

Instead, the doctor came into the room with a blank stare and grabbed my hand. “Matt, we found an 11-centimeter sized tumor in your small intestine,” he said. “We are almost positive it is cancer.”

They rushed me to Cleveland Clinic where they diagnosed me with stage 3c testicular cancer, which is the highest stage you can get. The cancer had spread all over my body, in my abdomen, lungs and small intestine—pretty much everywhere except for my brain.

My parents cried from the news, but I held my emotions in. When my girlfriend, Lauren, came to see me, I broke down.

Not long after, my doctor gave me an aggressive chemotherapy regime for the next 15 weeks, which caused me to lose my hair and nearly 35 pounds. 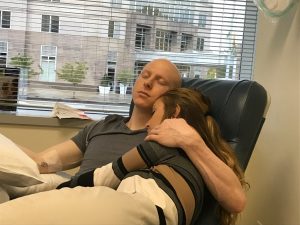 Doctors told me the treatment had shrunk my tumor, but now it had wrapped around my inferior vena cava, the central vein that goes from the bottom of your chest to the right atrium of your heart, which can be life threatening.

A few days later, they performed a 12-hour surgery to remove the tumor and the rest of the cancer in my body. They cut me open from my left hip to my right hip and took everything out.

After surgery, my body pretty much went into survival mode and my abdomen started swelling. Doctors thought it would diminish, but after being released from the ICU, the swelling continued, and my pain grew so intense that my family rushed me back to the hospital.

To help alleviate the pain, the doctors drained nearly seven liters of fluid from my stomach, which caused me to go into kidney and liver failure and eventually a coma.

This was the start of my life-changing journey. 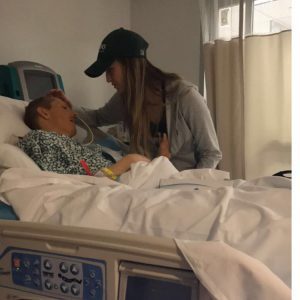 How Matt Ode found hope, strength and peace against cancer.

I grew up in a Christian family, and I rely heavily upon God when times are tough. God gives me strength and hope when I am at my lowest.

One way he did that was through my family and friends.

My parents came to ICU room every day, and so did my girlfriend, Lauren. We had only known each other for a few months before my journey started, but I believe God put Lauren in my life for a reason, as she became the caregiver that I really needed.

I also believe that prayer is the most powerful healing tool in the world, which soon proved true for me.

While I sat in a coma that doctors didn’t know if I would wake from, my mom organized three prayer services, where hundreds of people gathered and prayed for me, and thousands more did around the world.

As I lay asleep, I kept dreaming the same dream. I was running away from the nurses who were caring for me. I ended up in the weirdest places like amusement parks and beaches and then I eventually came to a big gathering of all my friends and family. They were cheering for me.

It had been two weeks, and now I was awake.

For me, it was as if God was saying, Matt, this is not the end of your journey, but the beginning of the journey I have always had for you.

I had lived to tell the story. 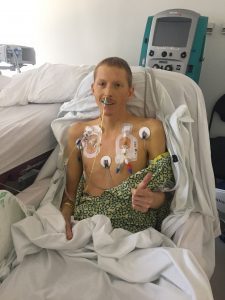 I would like to say my challenges were over, but the worst was ahead.

Because of my swelling, I had more surgeries on my abdomen—five in all—including an open wound surgery where they installed mesh. It looked like a shark took a bite out of my stomach and I still have a massive scar.

After waking up from my coma, I had an arrhythmia heartbeat, or when the heart becomes out of rhythm, which is extremely rare and eventually my heart stopped beating.

The medical staff performed eight minutes of CPR on me and were able to somehow bring me back to life. Then, I fell into another coma.

When I woke up this time, a week later, I couldn’t move or speak.

If I hadn’t hit rock bottom, I hit it now. For anyone who has ever experienced a low point in your life, it’s not always a bad thing necessarily, even though it may seem like it at the time.

For me, it was the beginning. I had this vision: that God wanted me to share my story to inspire others.

But before I could do that, I had to relearn how to do almost everything, including walking. I had dropped from 185 pounds to 110. It took me two years of recovery and focusing on my own health before I could even think about helping others. 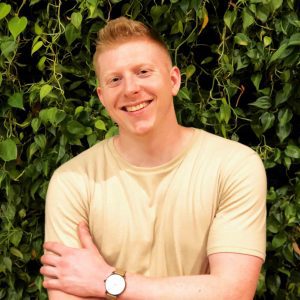 I have learned to never underestimate the power of sharing your story.

As my health improved, I joined a mastermind class with some other entrepreneurs and started sharing my story with others. Eventually, I was invited to speak at a conference with 250 young entrepreneurs.

I was that kid in high school who would freak out about public speaking, but something changed the night I spoke.

As I stepped up the microphone, I felt nervous, but even more so pumped, because I was sharing about something meaningful: how I lived to tell the story of surviving cancer and all the lessons I’ve learned along the way.

Afterward, nearly 50 people came up to me, sharing about difficulties in their lives and how they admired my vulnerability and perseverance. Many said it was the most memorable speech of the night.

Since then, I have continued to share my story on stages, podcasts, and through a Facebook support group I started that recently surpassed 5,000 members.

Live to tell the story

Cancer has brought such perspective to my life. I’ve realized that life is short and that I want to stop wasting time and letting fear dictate me.

My goal is to be a motivational speaker and inspire people to make positive changes in their life mentally, emotionally, and physically. You can see my website, Matt Ode Speaks.

It’s not always easy to be vulnerable and share my story, but it is so worth it.

Everything that I have learned through my journey with cancer, I want to give back to others. I focus on young adults with cancer, but I am realizing that my story also appeals to a broader audience.

I often share about HOPE, an acronym I seek to live by: Help One Person Every day.

At one time, I feared I wouldn’t live to tell my story. But since I survived, I will continue to practice HOPE and fulfill my life’s mission by sharing my story to as many people as possible.

To discover how prayer can help you on your journey like it did for Matt Ode, read Asking God for Help.

For more help with fear from cancer read:

Fighting the Fear of Cancer

10 Tips for Facing Your Next Cancer Scan