More Than a Conqueror

How a young adult with cancer finds hope, strength and peace.

My journey as a young adult with cancer began in the summer of 2012, when I decided to see a doctor regarding some skull sensitivity and headaches I was experiencing. I was 23, fit and active with no previous health concerns so had I no reason to think it was anything serous. After a series of scans and testing, I learned that there was a tumor in my skull that was growing and causing problems.

Doctors didn’t know what it was at the time but decided that, regardless of biopsy results, anything growing and causing pain in the skull needed to be removed. Within the next week my medical team referred me to Johns Hopkins Hospital in Baltimore, Md., for neurosurgery.

Getting surgery and treatment

Due to the location and size of my tumor, it was considered a high-risk procedure requiring an ear to ear style incision. One shaved head and 55 stitches later the tumor was removed and my skull was reconstructed with a titanium mesh patch. After several days of recovery in the Neuro-ICU, I received the results of the bone pathology diagnosing Langerhans Cell Histiocytosis (LCH). The disease usually manifest itself as isolated bone lesions but can also cause damage to other tissues throughout the body. There is no cure, however, the tumors are generally treated with surgery, radiation or chemotherapy.

After recovering from neurosurgery, I thought the battle was over and I had come out the other side in the clear. Within the next year I was proven wrong with a recurrence, the LCH was back and infiltrating my pituitary gland.

The treatment prescribed this time was chemotherapy. I was scheduled for a long road at the cancer center: 12 rounds of IV chemotherapy infusions that left me very nauseated and fatigued. After round 10 (50 total infusions), it was determined that the treatment was not effective, the tumor was still growing. So on to plan B.

I received seven sessions of CyberKnife radiation, which included making a mask molded to my face that would hold my head in place for an MRI and subsequent treatment of concentrated, precisely targeted radiation. Scans in the coming months and year revealed my treatment was successful, that the tumor was stable. Summer of 2016, I had second recurrence with a new tumor in my scapula and then in January 2017, another bone lesion in my skull, again treated with the CyberKnife radiation.

I still undergo follow-up MRIs and full body PET/CT scans to check for new malignancy and also measure old tumors to be sure they are not growing. All scans from the past couple years have shown that all tumors are stable and there is no new malignancy. In fact, my most recent skull tumor has started to recalcify with healthy bone growth. This is great news! 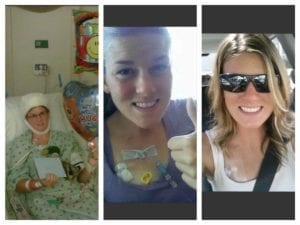 How I have found hope

In the years since my diagnosis and treatment I have been able to reflect on what has truly given me hope, strength and peace during this journey.

There were things that certainly helped, including the support of friends and family. Also, keeping a positive mindset and an internal dialog running “you are stronger than you think you are”, “keep your chin up” or “you are doing great” and celebrating even the smallest improvements in recovery or good test results.

I also found that when I was feeling sorry for myself, helping others took the focus off my own pity party. During this time, I sponsored a child through Compassion International. This helped remind me of all I had to be thankful for. When I felt discouraged, I’d write my sponsor child, who, by the way, did not have access to the blessings I do in this country, like clean water, world class medical care, etc. I found helping someone less fortunate put my situation into perspective.

The best source of hope

Despite all this, the true breakthrough occurred through my relationship with God.

When going through a challenging time it helps to have something grounded to reflect on. Not just a positive thought or an encouraging story, but an irrefutable truth you can anchor to even when everything around you seems to be up in the air. I found an undeniable peace when I put my fortitude and hope in God. Waking up from surgery or alone in the doctor’s office facing a recurrence, at times when no human should typically feel calm or safe, I experienced the “peace that surpasses understanding” referred to in the bible.

I approached the disease and treatment with the mindset that, although this was something I was going through it was not who I was. I realized I was not just what I was seeing in the mirror: diseased, bald, scarred, broken, weak. While those were true of who I was in the physical moment, they were not what defined me. Because I had put my faith in God, I knew the hope I had in him. I am who the bible says I am: fearfully and wonderfully made and covered by his grace and protection. 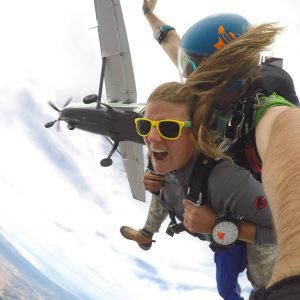 In Romans 12 it says we are more than conquerors through Christ. The true victory for me is not coming out the other side of a surgery or a successful round of chemo or even clear scans. The victory is to have found true joy in the midst of fearful situations. To rest in the blanket of peace knowing that you have put your faith and assurance in the one who holds all power and has already overcome these things on your behalf. Because of this, even if I lost the battle, I had already won the war. This is true for others who face cancer, too: the cancer may physically hurt you or cause you to lose battles, but you are already on the winning team. When your identity lies in who God says you are, you are loved and valued, no matter what suffering you face.

That’s what makes someone more than a conqueror.

When I saw my life and circumstances through this perspective, I had nothing to be anxious about. I have an allegiance to a power that is bigger than being a young adult with cancer and outmaneuvers fear. There is a profound amount of power and freedom in that.

To find help on your journey like Jenna has, read Asking God for Help.

For help with conquering fear, read Fighting the Fear of Cancer.

For more about how to find spiritual hope, read Knowing God Personally.