The Strength of My Heart

How a 28-year lung cancer survivor finds hope, strength and peace in suffering.

I’ve had many health challenges in my life, but I think lung cancer scared me the most.

Growing up in Maine, I discovered I had some mysterious health problems when I was a teenager. Later the doctors discovered that I had lupus, when I was just 20 years old.

It was 1955, and at the time there wasn’t a lot known about lupus. Now we know that lupus is a chronic autoimmune disease that leads to inflammation and tissue damage in virtually any organ in your body, including the heart, lungs, kidneys, joints, skin, etc. Essentially, the body’s immune system mistakenly attacks healthy tissue.

Lupus makes me tired all the time and I was never able to work outside the home. I’ve had many flare ups and hospital stays throughout my life.

Even worse, doctors told me I’d be lucky if I lived past 50.

I have been taking prednisone, a type of steroid medication, for decades which has weakened my bones. Due to this I also have osteoporosis and rheumatoid arthritis.

With my health, it seemed like it was one thing after another. And then I got the lung cancer diagnosis when I was 57—even though doctors didn’t think I’d live that long.

I knew something was wrong because I started having sharp pains in my back that would come and go. I thought it might be from where I had my back fused. The X-rays told a different story, so my doctor ordered more tests.

I’ll never forget the words my doctor said that no one wants to hear: “You have lung cancer.”

It was 1993, and I was in shock and scared and exhausted because all of the health problems I had already faced.

But cancer was different. Beyond just a chronic problem, this felt like a death sentence.

I had a lot to live for, especially my husband, and our two kids. And I was scared to leave them behind.

I was forced to draw strength and hope from the same place I’ve found it all these years: through my relationship with God.

I thought, God has brought me through everything else and he will bring me through cancer, too.

I was brought up in a family that valued knowing God, and later I began a personal relationship with my Lord and Savior Jesus Christ.

When people ask me about how I have been able to deal with all of the suffering I have walked through, I remind them of what Jesus had to endure.

He suffered the worst trial of all which included being whipped and crucified on the cross. He did this so our sins would be forgiven, and we would be with him one day. If he could do that for me and for you, then I can go through cancer and everything that comes with it. This is my cross to bear on earth and I will have hope because Jesus is with me.

I see suffering from health problems as not a punishment, but an awakening to show us we are not alone, and that God can help us. For more about why God allows suffering, you can also read this article.

I also find encouragement through the Bible, including this verse: “My flesh and my heart may fail, but God is the strength of my heart and my portion forever” (Psalm 73:26).

This has proven true in my life, with lupus and lung cancer. God gave me strength and has helped carry me when I was weak.

Though getting lung cancer was scary, the good news was the doctor caught it early. They treated it with a lobectomy, or by removing one third of my left lung.

After a successful surgery, they monitored me every year with x-rays and CT scans. 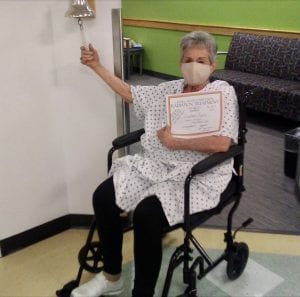 I stayed cancer free, but faced other complications, like battling lung infections and I had an adrenalectomy, or a surgery to remove an adrenal gland. I also had pelvic and bladder reconstruction, two hip replacements, surgery to fuse my back and later a heart attack.

Through it all, I never gave up hope and knew that Jesus was with me.

In 2016, I was surprised when they discovered that my lung cancer had returned, 23 years since the first occurrence. Now they noticed a spot on the right side of my lung and again they performed a lobectomy.

I experienced fear again, and this time I especially feared leaving my daughter, Deb, who I am very close with. My husband has since passed from pancreatic cancer and my son also died in an accident in 2010. I wanted to be here longer for her, especially since Deb has faced her own cancer journey.

I prayed that I would again be cancer free and indeed the cancer stabilized for a few years.

But in October of 2019, the cancer progressed and is now in a terminal state. Due to my health issues, I am not a candidate for chemotherapy or another operation. My decision was to try radiation to see if it helps in slowing the cancer, but I can see my journey here on earth is coming to an end.

Peace for what’s next

I am at peace with that. I have been blessed to live 85 years—I wasn’t supposed to live past 50, but here I am. Praise God for this gift.

For those read my story, I ask you to consider opening your heart to Jesus. So often, we can let our ego and pride get in the way of finding God as our strength, yet he is waiting to give it.

He will change your life forever and one day we will be with him in heaven. We can live a new and glorious journey without end!

Like I’ve found, facing problems, whether great or small, God can be the strength of your heart—both now and forever.

For more help with finding strength outside of yourself, read Asking God for Help.

If you would like to learn more about to begin a relationship with God, read Knowing God Personally.