How wrestling with my dad’s cancer diagnosis helped me find hope and purpose.

Up until this point in my life, I had not thought much about the question, why me, God?

But once my dad was diagnosed with metastatic prostate cancer in 2014, there was no ignoring it.

I was 23 years old. I grew up in a family of four in small town in North Carolina—it’s one of those towns that if you blink, you’ll miss it.

At the time, I was working and living on my own. My roommate had just moved out and taken most of the furniture with her, and so I was sitting in a nearly empty living room.

My dad called and told me he had prostate cancer. I was in shock with his words and the emptiness of the room seemed to echo the unsettledness I felt.

Dealing with the news

At first, I shut down. Later, I poured out my feelings in my journal:

“I know my dad puts up a front to be strong, but I know on the inside he must be scared to death. I guess maybe that’s how I am. I’m okay on the outside, but on the inside I feel lost. Confused. Scared and unsure of what I’m supposed to think and feel.” 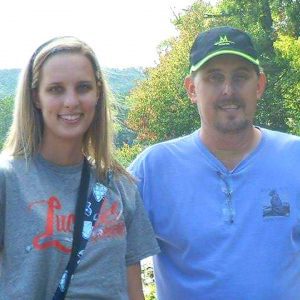 Growing up, my dad and I were close. People often tell me I look like him, especially my eyes and nose.

He has always been there for me. He was my coach in soccer, basketball and softball.

Now I feared the worst for him.

Doctors removed his prostate in September, but they were concerned because the cancer had spread to the surrounding tissue.

Is he going to die? Will he be there to walk me down the aisle someday?

Soon my wrestling turned into resentment.

My dad has never drank alcohol, done drugs or smoked and he has to be the one going through cancer. Why him? Why my family?

I grew up going to church, though admittedly I had stopped attending years ago. I was in a toxic relationship, and that and some other factors prompted me to pull away from my relationship with God.

When my dad was diagnosed, my faith was lacking, and I began to wonder if God would even listen to me.

When something bad happens, that’s when you need to either run toward something or run away from it.

I chose to run to God.

I ended the relationship I was in, and I started going back to church. As I drew closer to God again, I felt this peace.

I realized that God is in control and the one who is going to take care of my dad. Once I handed my dad’s cancer over to him, that’s when I felt a freedom from fear and worry.

I never knew the weight I was carrying until it was finally lifted from me.

These words were especially helpful from Joshua 1:9: “Be strong and courageous. Do not be afraid; do not be discouraged, for the Lord your God will be with you wherever you go.”

I found strength knowing God was with me.

I still faced the uncertainties of my dad’s cancer, but now I had peace and hope to face it. 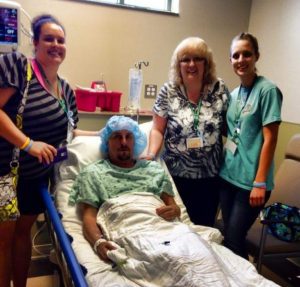 Cancer has changed my perspective and motivated me in some unexpected ways.

During the beginning of my dad’s journey, I visited him at Cancer Treatment Centers of America, where he was getting eight weeks of radiation.

He showed me around and I met several other survivors. The atmosphere was very peaceful and supportive. It made an impression on me, and I knew that eventually I wanted to help bring hope and cancer awareness to others.

Eventually, that’s what I started doing.

While I am typically shy and reserved, this new passion helped me pushed past my own barriers.

I began volunteering with an online community of cancer fighters and I also organized two cancer walks to raise money for cancer patients.

I also started a podcast, Why Me, God? in February of 2021. The title is a callback to how I felt in those first moments with my dad’s diagnosis. It serves as a reminder of where my family and I started and where we are now.

I have interviewed 15 people and look forward to more. If one episode helps just one person, then it is all worth it to me.

How my dad is doing

Recently, my dad reached the seven-year anniversary of when he finished radiation. He’s doing well considering all he has been through.

Doctors say he has metastatic castration-resistant prostate cancer, which means the cancer is slowly spreading to other parts of his body. His PSA, or prostate-specific antigen, continues to remain low, which is great, but they keep him under close watch.

Cancer has taught me to cherish the time with my dad, because I know he won’t be here forever. None of us will.

I know the valleys and the seasons are tough and even unbearable at times. It’s easy to get tunnel vision and only focus on the distress of the season, instead of looking beyond and realizing that light, hope and blessing could be just ahead.

I think it is healthy to ask the hard questions, like I did, including why me, God? I also think it’s ok to be angry and upset—but don’t stay there.

I want to encourage others to lean into your faith and beliefs, especially in a crisis. If you don’t have faith, now is a great time to be open to a relationship with God.

Give all your worries and cares to God, for he cares about you. When you reach out to him, he will be there to listen and will never leave your side.

He continues to do that for me.

If you just started your journey, read Letter to a Newly Diagnosed Cancer Patient.